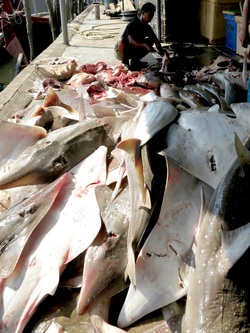 A Boat goes fishing, cast it's nets, and as their raise the nets, sharks are caught, most already dead.
They bring their catch to the middle man, the Chinese Toke, here on Bintan and get a cut on the catch. (not much at all).
The sharks are quickly cleaned and the fins cut to start the drying process.
Small, big, anything goes, and eventually finds a buyer.
This is the asian system where everything that can turn some cash is used and definitely not thrown away.
For some shark species the meat goes straight to Singapore to be processed into Fish balls for soups.

The system of other places is just to cut the fins, throw the rest out to the sea.

the issues of by-catch is enormous were report of over 60% of the catch is thrown back in the big commercial fisheries including the  more fervent advocate of green ethics.

So to the credit of the local fisherman and Toke here, there is no waste. But money is money, and no money no honey.
So the last wilderness is combed through to bring back the last catches. No place to hide for the fishes.

contrary to the belief that the sea can be policed, it cannot, unless military style surveillance is used,  at huge expanses, and most of the time to protect and benefit the future profit of giant corporations.

the one who always suffer at the end of the day is the small fisherman.

It is the consumer that buys, and keep buying no matter how much the price tag is. As long as humans thinks they going to have power and perform better in bed because of it, for all the ones that pledge not do do something, most will keep doing it in private. the practices simply move underground.

Very little i would say. And for a conservationist i am right now shooting myself in the foot. This guy cannot achieve anything with that mind set.
What we really need to do is take the bull by the horn, and like in most cases, that bull is so strong that it either kill you, cripple you or you just let go of the horns and watch him create hammock around the place and you lost. And no one likes losers. so the art of showing you are a success is to drop the grand dream of the impossible and keep working on very small issues that you know you will be able to create a positive story out off. And then people will clap.

It is time to speak honestly, speak the truth, stop selling the idea that you are saving the world, accept facts, and make the move you can.
many are also making a living out of the desperate need to help, make a difference, and so forth. some NGO's have budget that would feed the entire village they pretending to help, but most of it is recycled into the cybersphere and cocktail dinners to keep some money flowing. The guys at the end always, always receive only the trickles, droplets from a stream. There is no proportionalities anymore. And until this gets resolved no end of the tunnel in sight.

Until the demand stops there is no way, absolutely no way that you can stop the genocide taking place in the worlds ocean right now.
The fisherman is not the one to blame, the consumer is.