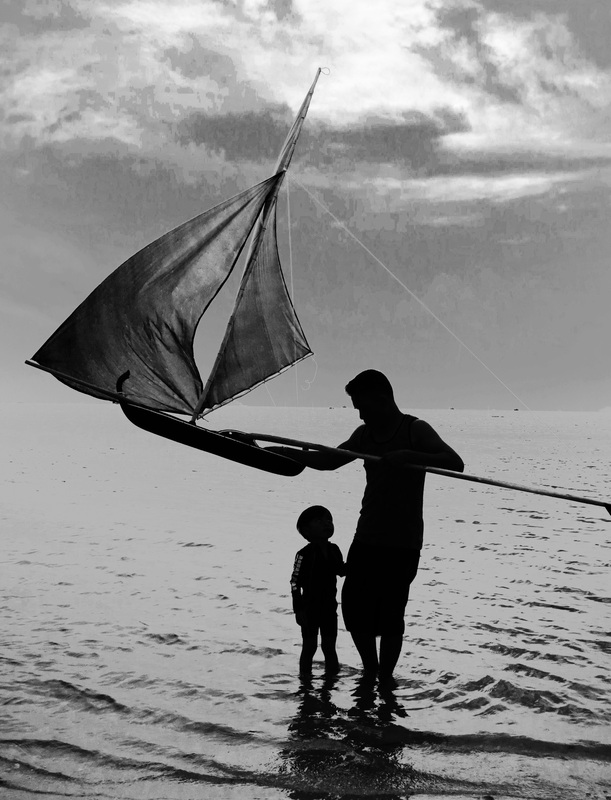 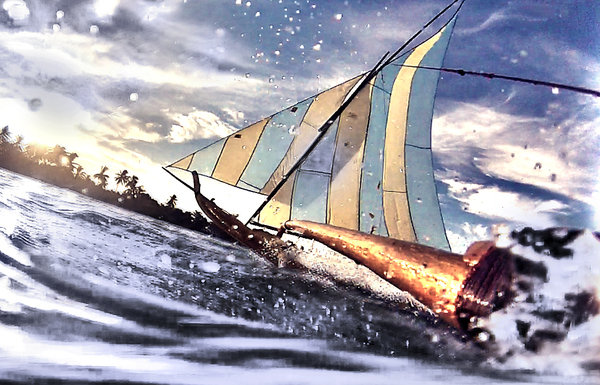 The story of racing a Jong

“You need to get married with your Jong” says Zakir, late one night sipping coffee on the beach.

I first met Zakir on New Year’s Day sailing his Jongs with a few friends. The beach was full of kids playing and the sails attracted me like a magnet.

I love sailing, not just the sailing boat themselves but the entire spirit that moves people to go and be with the element and brave the sea.

The Jongs are “sexy” boats, using seductive methods to “catch” you. In the western sailing world, boats are always referred as she. At first you start flirting around, watching them from afar, inspecting, curious. You strike a conversation with the owner, and get a glimpse of the Jong name and personality.

Eventually I got married too. I bought two Jongs during a racing event in Teluk Sebong, from the Jong makers of Bengalis in Easter Sumatra. Zakir chose the Jongs, my “wives”, acting as my matchmaker.

We renamed the boats, one he chose: Bule Kampong (literally the white man from the village) and the other I chose originally Planet Samudra (ocean planet), but we cut to the chase and she became simply Planet.

The tradition of the Jong predates the arrival of Islam, deeply rooted in the animist world of spirits. Originally designed to send out gift of beetlenut and other sacred food out to sea, the Jongs evolved to become real sailing art pieces.

Although they are unmanned boats, many secrets guard the “jong”. Each builder finds new way to improve the design. But the design itself stays the same. Rooted in geometry and symmetry, based on the human body.

I spent many nights with Zakir and his family, but also alone, speculating on the mystery that surround the world of Jongs. A dream state to reinvent the possible history of jongs.

They are intimately connected to the Orang Suku Laut, the original nomadic tribe that controlled the sea around Riau. They became the navy of the Malays, but also cultural players in the courts of the Malay aristocracy.

Many group of Orang Laut are intermixed now, more sedentary, some downright outcast, but a spirit of freedom prevails.

The Malays themselves are scared of the power of the orang laut magic. And you do need magic to truly sail a Jong.

“you need to keep your heart clean”

So we decided to organize a first race in Teluk Bakau, during the Northwest monsoon last March. The first event in Teluk Bakau earlier in March 2013 proved that the local could rise to a challenge and takes care of the logistics for a complex new endehaviour.

This came with a lot of “Gotong Royong”, meaning people doing things to help the community and each other.

Although the original plan was to have a much smaller event, the attendance grew, and we ended up with 4 villages competing, with a rarely performed interactive dance in the evening to celebrate the achievement.

In the spirit of trying to be holistic, the seasons gave us our tempo, one race for the “utara”, or northwest wind, and a “selatan” race, for the southeasterly winds.

The Jong owner upkeep, maintains and keep the jongs alive. The players help launching the boats, one can be assigned a jong to be tested, tuned and so on, so many people actually learn the art. But few bother to own jongs. Everyone loves to see and play with them.

Kids are watching the Jongs getting tested and a few will become Jong sailors.

Usually a few man, Jong masters have a fleet at their houses, with different sails and hulls to give them the edge during the race. One Jong will perform well in high winds; another is more suited for lighter winds.

In the evenings, the organization side was discussed. Zakir spearheaded the actual race, setting and testing the course, ordering the poles, getting the jury, a boat was lend to keep the starting jury in the shade and dry, a few rules, and Zakir went around Bintan on his bike to contact his friend and network to attend the race. (And a lot of phone calls). Another person prepared the invitation to be delivered and so forth.

By 6 am the “the crew” is up and running. Poles are fixed in place, last beach clean up, chairs are coming, and food is arriving. By 7 am the first Jongs are coming, some by cars, from a few hours away, some by bikes, and some by foot.

6 villages are participating, a few are setting their small shops of snacks, and we provided drinks to the players.

The elder that will open the ceremony is making the opening prayer, and a few local head of the different area are coming to show their support.

The beach is now full of spread out Jongs. Each village has been assigned an area, with a pondok to keep their belongings, and coffee served.

Those moments are magic, rainbows off colors on the beach. But the most important element is here, and not shy: the wind. Blowing in gust of 15 knots, everyone knows there will be a few casualities during the race.

And the tide start rising, fast.

The MC needs to walk around a lot, setting the tempo for the players to be ready.

And the tempo cannot slack off, over a hundred Jongs are now opened on the beach and more than 80 will need to race the preminilaries to get into the finals.

The finishing line is set and the first set of Jongs is going out to sea. The race is tricky, this is the first “selatan” race held, and it took the Teluk Bakau team a few days to figure out how to tune the Jongs. So we definitely have a winning edge there.

“27”. This is me. So I pick up my jong, I didn’t do any readjustments apart from the tightening of the outrigger and start walking towards the starting line. I take with me a little gopro camera to catch a bit of the action, but my concentration is on getting “bule Kampung” a chance. The wind is blowing 14 knots, but slightly gusty.

I am there, on the starting line with ten other boats, waiting for the signals. Each number is called out.

“Satu, Dua, Tiga together with the whistle” the wind is strong and the only thing I hear is the whistle. So I have a few second delays in my start. From there you watch your “horse” and you will know the result from a hand signal from one of your teammate. The walk back to the beach is serene; I made it to 3rd place, enough to enter the finals.

Time for my second jong “Planet” to race. Walk to the line, a struggle, the boat is bigger and any lapse of attention sends the boat on a course. A truly “wild horse” this one. I do a quick adjustment on my lesting and “Satu, Dua, Tiga!”

Here she goes, deviates and collide with another boat, actually a friend that we nickname Kacamata (glass eye) because he wears thick eyeglasses. But somehow the to Jongs are slowly going, and the faster boat missed the finishing line and came of the “goal”. So the two boats limping almost cross the line but make it to the finals as well.

By this stage luck has entered the stage, to become a serious player to be reckoned with.

The whole bus of student from the maritime university is busy taking pictures and mingling around. In fact they made a program here to set up an experiment on the effect of bauxite on sea grass growth. Today is playtime.

The jongs that didn’t make the finals are dismantled quickly to leave the scene bright and clean for the finalist.

After a few casualities, a couple of Jong broke on some rocks, being too much of course, we shorten the lunch break and start the final. Zakir boat is on that line, one from kacamata, one from Berakit, one from busung, Malang Rapat, and I choose to open Planet, while I need someone else to launch Bule kampong.

bule kampong takes the lead, zakir boat follows very closely, and planet decided to ram another boat. So she struggles a bit. Bule kampong decides before the finishing line to let Zakir boat takes her over in an inexplicable sudden stop to keep then racing to finish second. Planet’s pride after getting rid of the boat it just ram decides that she wants to be on the podium and makes an unbelievable finishing sprint to finish third. (She is a completely wild boat, I guess more interested in creating a bit of trouble but probably the fastest boat. I will need to learn how to tame her a bit.

I couldn’t believe it myself, and luck walked by my side.

The walk towards the beach now is almost shy, but the spirit of racing took all inhibition about feeling shy about trying to win. I was getting “panas” (hot in Indonesian).

The crowd was cheering, and a lot of thumbs up. Teluk Bakau, and our Jong group hold down their turf quite well.

The final for the small race then start, and the mangrove snake from malang rapat wins heads up. Zakir boat takes second place.

The race brings people together, old, young, man woman, there is no boundary.

But maybe, the most important aspect is the fact that kids are now taking an interest. It is a tradition to feel proud about, cherish and grow for the future.

It is competition, it is about a clean game, and it is as green as it can get, no carbon footprint, and an art of precision, attention and true values, a game of technics and our planet, and a vehicle to share and present ideas. 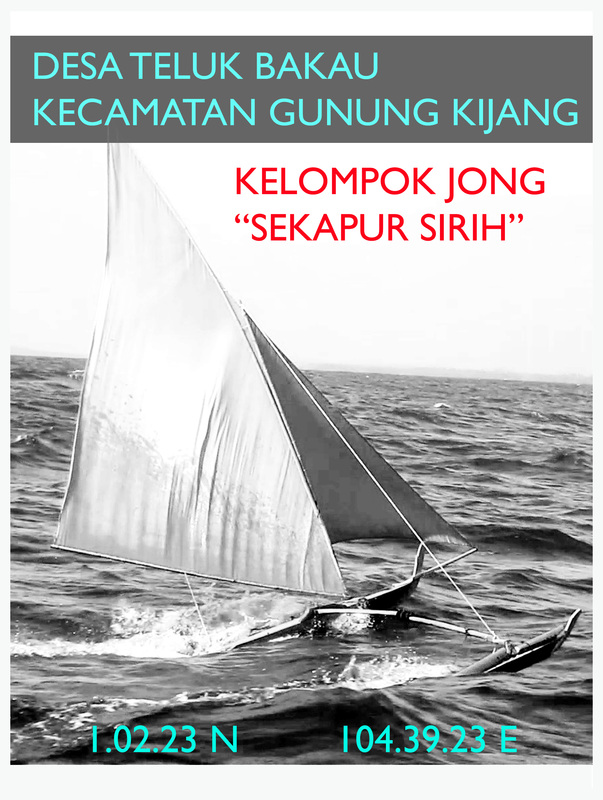 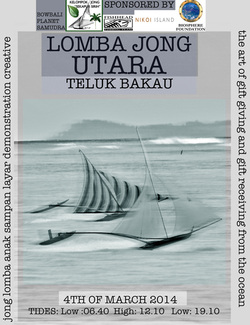 The next race is on, featuring a race for kids.